I've finally written it.  It's taken so long because the thought of writing scares me a lot. I keep looking for excuses like having loads of work to do or being too tired or even just deciding that I don't have the time.  My list of excuses goes on and on.  However, they are not true. They are just excuses that I come up with every time I want to write something, even a post card. But I will keep fighting myself, stop looking for excuses and write. So welcome to my fourth post! :)

Today I am going to show you how to cook a famous Libyan soup called Sharba. Words can't describe how delicious it is. My mother makes it as a starter every day during Ramadan. She tried to make it during the other months as a main meal but we never let her because it is cooked with small pieces of meat and thus doesn't qualify as a main meal. Because of this, Sharba became a Ramadan meal for me and I never thought of making it during the other months.  That was until I volunteered to cook for a weekend away with the university and they wanted soup for lunch.  At the start I said I don't know how to make soup . But then I remembered Sharba and I thought, "wait I can cook Sharba." So I called my mother, she taught me how to do it and I made it for 36 students.  And they all loved it (or so I hope). :) 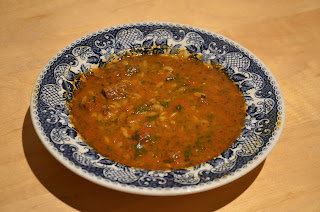 Preparation method:
1.   Fry the onions on medium heat until golden then add the meat and leave it for couple of minutes.

* For vegetarian/vegan skip the meat .
2.  Add the tomatoes, tomato paste, salt and the rest of the spices (  again the spices use as much as you can bare ! ). If you are using meat leave it cooking  for an hour. If not let it cook for about 5-10 mins.
3.  Check if the sauce needs water if it does add water, let it boil, add the Sharaba, and leave it for about 2 - 3 mins or as instucted on the packaging.
4. Add the minced herbs, turn of the fire and cover for about 3-5 mins.

The recipe is nearly the same as Mbakbaka, as they are both pasta. However, Sharba uses less tomato paste and and more tomatoes . Enjoy :)
Posted by mahfy at 22:12 3 comments: 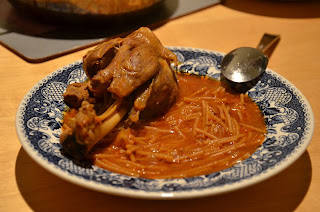 After two months of Shakshoka, I called my mother and asked her to teach me something else because I couldn't have Shakshoka any more!!! She decided to teach me Mbakbaka, which I was more than happy to learn, not just because I had had enough of Shakshoka, but also because it is a delicious Libya pasta where the pasta is cooked in a red sauce.  It is called Mbakbaka, because the pasta is added when the sauce is boiling, and 'Bak Bak Bak' represents the sound of the bubbles. ;) It is also called the singles pasta because it is so easy that even single men can make it. Mbakbaka is definitely one of the main Libyan dishes and is made in every Libyan house at least once a week.


After I learned how to make Mbakbaka, I decided to invite one of my friends to dinner. Luckily I decided not to cook until she came because, when I got out meat to begin cooking, she said, "I don't eat meat. I am vegan." My mind started shouting, panic panic. A Libyan meal without meat!!  Then I said aha, went to the fridge and got out chicken.  She looked at me surprised and said again, "I don't eat meat."  Then I with absolute confidence replied, "I know, this is chicken."  The poor soul was amazed at my definition of meat and had to explain to me that meat is not only lamb but also beef, chicken and any other living thing.  The fun part is that on the next day I was talking with my mother and told her that I cooked for a friend without using meat and, when she asked why, I answered that it was because she doesn't eat meat.  My mother replied, "Why didn't you use chicken then?"


Preparation method:
1.  Fry the onions on medium heat until golden then add the meat and leave it for couple of minutes.
* For vegetarian/vegan skip the meat .
2.  Add the tomatoes, tomato paste, salt and the rest of the spices ( the  spices use as much as you can bare ! ). If you are using meat leave it cooking  for an hour. If not let it cook for about 5-10 mins.
3.  Check if the sauce needs water if it does add. I personally like the meal to have loads of sauce some like it with less. So the amount of water depends on your taste.
4.  After the sauce started boiling, add the pasta and cook as long as it is instructed on the package.
5.  Serve hot :) easy beasy :) 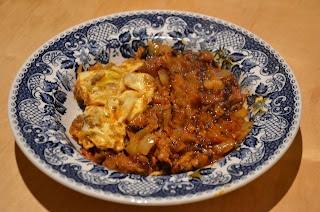 After losing about 6kg and two months of cheese, pita bread and occasional ready meals from Sainsburys, I thought maybe I should cook something! (Which, knowing how clumsy I was in the kitchen, was a horrifying idea. :O ) Anyway, I decided I could do it, I could use the stove and cook a very easy Libyan meal without sounding the fire alarm or ending up in the hospital with stomach pain. I just needed to think of an easy meal that I liked.

One day while I was talking with Yazeed, a very dear friend of mine, Shakshoka came to my mind. Shakshoka is basically an egg curry. It is a very easy meal, with a great taste, especially if it is made with Gedeed ( Libyan version of dried meat ). So I asked Yazeed to ask his mother to teach me how to cook it which she did. I was so happy with it, finally a homemade meal, that I kept making it every day for about two months, until I got so fed up with it that I never cooked it again. Well, until yesterday! It has been about 3 years since the last time I made it, however eating it yesterday reminded me of how much I love it

Ingredients:
3 tbsp Oil or Gedeed (Well, really just add as much as you like :) )
1 Chopped onion
2 Chopped tomatoes
2 Eggs


Preparation method:
1.  Fry the onions on high heat for a bit with the Gedeed.
2.  Add the tomatoes, tomato paste, salt and the rest of the spices ( the     spices use as much as you can bare ! ). Leave it cooking on a medium heat for a bit.
3.  Break the eggs over the mix and make sure that they are spaced and let it cook until the eggs are cooked. Serve with bread.
Posted by mahfy at 00:46 No comments:

How did it all start ?

I love cooking. Well, to be honest, I love food. Before I left home and came to Scotland (hint the kilt ;) ), I never cooked, why would I?  I had an amazing cook, who I call Omi (mom in Arabic). (God bless her she is a wonderful cook!) Okay I know, everyone thinks his mother is a great cook, but trust me my mother's food is different.  It is brilliant.

You must be saying, "okay this guy loves food, and his mother is a good cook, so why is he cooking then?"  Well, my mother is in Libya and I'm in Edinburgh. And I couldn't find a restaurant that could replace my mother's home food. Don't get me wrong, some restaurants had very delicious food, but there was something missing.  Home food has something special in it.  I couldn't just live on restaurant food! I had to learn how to cook, and after a while I discovered that I actually love cooking.

So join me in my cooking adventure, and if you happen to be near by please do come and taste some of what I cook!
Posted by mahfy at 00:55 6 comments: